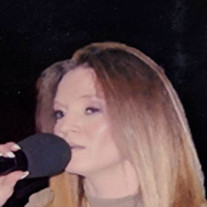 Tina Marie Riis  Arrived January 6, 1970 and fell asleep in death on December 18, 2018. Luke 8:52 “Stop weeping, for she did not die but is sleeping.”    Tina Marie was born on January 6th, 1970, and died of natural causes on December 18, 2018.  She was the oldest of three daughters.  She is survived by her sister Amy, whereas her youngest sister, Toni, died in 1991 at the young age of 15.  Tina’s instructions were not to have a funeral or be buried, but to be cremated.  After recently attending her Aunt Patricia’s Celebration of Life, she said, “That’s what I want if I die, Mom.”  So, later we will plan a memorial service and celebrate her life.  Although she was a homebody and not an adventurous person, Tina flew to Vegas and to Packers games.  She was proud when she finally got her drivers license in April of 2017.  She said it didn’t matter that she didn’t have a car, but “I have freedom! I can drive on the Interstate!”  At the time of her death, she was making new friends and a new life for herself and her cat, Sammy, in Waukee, Iowa.  Sammy had become her comfort, her joy, and constant companion.  Tina was happy to once again to be back near her mother, Lucy, and her stepfather, Don (whom she said was like a dad to her).  She was also very happy to again be near her sister, Amy, and Amy’s companion, Jon.  Tina especially loved Amy’s children, Cody, Levii, Madalynn, and Micaiah.   Tina loved hosting movie nights with her family where she’d cook dinner or have pizza. She never wanted these special times together to end.  She told Amy she was her world and she couldn’t ask for a better sister.  She loved her many aunts, uncles, and cousins.  She frequently spoke of the many ways they went out of their way to make her feel special and loved.   Tina cherished every one of her friends.  Several have commented that she was the best friend one could have.  They have said she was a true friend, one who listened and really cared, a friend who truly would “give you the shirt off her back.”  She never lost hope of reuniting with her best friend, Brenda.  She told her mom they were like twin sisters.   Tina had many very dear friends.  For example, she deeply loved Howie Sloan who is like extended family to Tina’s surviving family.  Shannon, her Advocate, gave her not only support but also friendship.  Shannon said that Tina was one of the strongest women she knew.  She helped Tina lay down new roots and new beginnings in Waukee where Tina was happily renewing old friendships and making new ones.  Brian was an old friend who had taken her out fishing again.  And Tina recently became close to a neighbor, Mynette, and her sister, Misty, as well as their parents.  Demonstrating the depth of their friendship, Mynette and Misty were very helpful to her family after Tina passed away. Tina also enjoyed fishing, movies, cribbage, playing pool, and singing Karaoke.  She loved finding a good deal and collecting purses and shoes.  She loved cats and had one most of her life. Sammy was special though, becoming her “comfort cat.”  Singing was Tina’s passion.  She sang as soon as she learned to talk. At a Judds concert shortly after her sister Toni died, they sang  “Love can Build a Bridge”.  It became a favorite, and we found a CD of Tina singing it.  When she sang “Grandpa” for her Grandpa Bob, he cried.  Bob handed down to his children and grandchildren an old time lullaby (some say a poem) which Tina often sang, leaving no dry eyes in the room.  The song’s title is “Two Little Babes.”  Tina also loved listening to Grandpa Bob’s stories and she believed them all.  He called her his Tinker Bell and she loved him more than any other man. She was funny with a great sense of humor and made us laugh.  Her favorite gag was to dress up like Dorf.  Born with blond hair, she kept it that way her whole life.  And she loved a good blond joke, telling them as if they were a badge of honor.  Sometimes she’d tell one just to be mischievous. (A favorite: “Why are blond jokes so short?  So men can remember them.”)  May all of her family and friends know how much she loved them.  How grateful she was for even the smallest act of kindness, love, and support.  A visit, a phone call, a card, or letter meant so much to her.   Tina believed in a Creator and believed Bible teachings.  It is her family’s hope and prayer that they will eventually be united with all their loved ones in the promised Paradise on earth soon to come, and that Tina too will hear the voice of Jesus call to awaken her.  “...he took her by the hand and called to her: ‘Child, get up!’” (Luke 8:54) Tina was preceded in death by her sister, Toni Michelle Higgins, in 1991. She is survived by many relatives including her mother and stepfather, Lucy and Don St John; sister, Amy Lynn Berg;  and Amy’s children, Cody, Levii (and husband Tanner); Madalynn; and Micaiah.

The family of Tina Marie Riis created this Life Tributes page to make it easy to share your memories.

Send flowers to the Riis family.