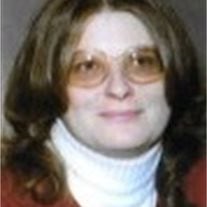 Theresa Ramsey was born November 2, 1953 to William and Mildred Mallory. She was second youngest of their nine children. (Sandra – as a kid) She grew up on the East side of Des Moines and attended East High School. On Jan. 1, 1970, her son Scott was born. On Nov. 24, 1972, her daughter Deanna was born.  In fall 1973, she met Dan Ramsey and they later married on Jan. 24, 1974. They moved to Ankeny and later settled in Mitchellville, Iowa where they built a home. Dan adopted Scott and Deanna (Janna) shortly after they were married. On Sept. 23, 1976, their daughter Sara (Sarie) was born. In the early years of their marriage, Theresa worked as a nurse aide and as a saleswoman at Nusash Windows. In 1984, they opened Mitchellville Auto, a car sales business. Together, the two built the business, which remains open after 35 years. She loved dogs, horses and singing along with her favorite “oldies” tunes. Shopping was always on her radar and she made a hobby out of finding a good sale. She enjoyed the outdoors and camping. She loved the holidays and being with family as well as baking sugar cookies, whipping up fudge, peanut brittle and an assortment of other candies that she could share with those around her.  She loved to laugh and joke and sometimes exaggerate her stories. She was strong and fierce – fighting through a number of health issues over the years.  On March 26, 2019, Theresa left earth and entered the loving arms of God, our great physician. She loved her family in abundance and will forever be missed. She is survived by her husband, Dan Ramsey and three children Scott Ramsey, Deanna Carder, Sara (Jeremy) Wille; seven grandchildren: Sierra Ramsey, Gannon Ramsey, Justin Savage, Tyler Carder, Jack Wille, Ava Wille and Ryan Wille; and five siblings: Raymond Mallory, Deanie Mallory, Sandra (Art) Martinez, Tom Mallory and Denny Mallory.  Memorial contributions may be directed to the family in care of Ouellette Funeral and Cremation Care at 2011 SE 6th St., Des Moines, IA 50315.

Theresa Ramsey was born November 2, 1953 to William and Mildred Mallory. She was second youngest of their nine children. (Sandra &#8211; as a kid) She grew up on the East side of Des Moines and attended East High School. On Jan. 1, 1970, her... View Obituary & Service Information

The family of Theresa Jean (Mallory) Ramsey created this Life Tributes page to make it easy to share your memories.

Theresa Ramsey was born November 2, 1953 to William and Mildred...