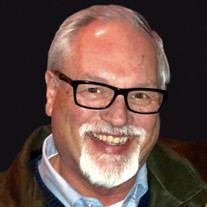 You may join the family via livestream at https://my.gather.app/remember/rick-miller Rick D. Miller, 64, of Ankeny, IA (formerly of Ottumwa) died of COVID-19 at 4:46 a.m. November 12, 2020 at Mercy Hospital in Des Moines. Rick was born in Ottumwa to George Dean and Dixie (Short) Miller. Rick grew up mainly in Ottumwa, Iowa, but had also lived in Rock Island, IL, and Wichita, KS. After graduating from Ottumwa High School in 1974, he attended Central College. He returned home to marry his high school sweetheart and the love of his life, Susan Knight, on July 12, 1975. This union was blessed with two daughters: Amanda and Angela. Rick’s career as a salesman began early in life. At the age of 7 he was sweeping sidewalks and selling flowers, and as a Boy Scout in Rock Island he could single-handedly out sell all the other Scouts combined. This led to a lifelong career in sales. He was a natural salesman, team leader, and manager for Mid-States Supply Company for the majority of his career. He enjoyed meeting new people and traveling the world with his business. Most recently he had worked for Ferguson Enterprises. Everyone who knew Rick loved his sense of humor and good-hearted nature. He had a laugh and smile that could fill up a room. He was an avid sports fan, holding Iowa Hawkeye Football season tickets for years. He cheered for the Wichita State Shockers, Chicago Cubs, and the Kansas City Chiefs and shared this love with friends and family. Many people saw their first live Hawkeye game of Chiefs game because of Rick’s generosity. More than anything Rick worked, played, and lived for his family. He loved his wife Susan for more than 45 years, and took care of her as they grew up together. He was also the oldest and best looking of the Miller clan, and he beamed with pride when introducing himself in such a manner. But nothing gave him more joy than his three grandchildren. He would drive from practice to practice and game to game just to catch a few moments of them playing. His family was his life and his Legacy. Surviving is his wife, Susan; daughters: Amanda (Chris) Mein of Ankeny, and Angela (Will) Collum of Ankeny; grandchildren: Kristin, Adam, and Mackenzie; eight siblings: Dirk (Lori) Miller of Urbandale, Chris (Ann) Miller of Milan, Jeff (Lori) Miller of Ottumwa, Tony (Tresa) Miller of Ottumwa, Theresa Buckingham of Bondurant, Jerry (Sara) Miller of Ottumwa, Sam (Julie) Miller of Cedar Falls, Charley (Kris) Miller of Ankeny, and; numerous nieces and nephews, and more friends than we can name. Preceding him in death were his parents: George Dean and Dixie Miller. Rick was one of the most selfless men to ever walk this earth, and should be remembered for his kindness, humility, and faith. Due to COVID-19, private family services will be held Tuesday, November 17, 2020 at 1:30 p.m. at the Holy Trinity Lutheran Church in Ankeny. Rick came from humble beginnings, so in lieu of flowers please consider a donation to the Holy Trinity Lutheran Church Food Pantry at 517 SW Des Moines Street in Ankeny, IA 50023.

You may join the family via livestream at https://my.gather.app/remember/rick-miller Rick D. Miller, 64, of Ankeny, IA (formerly of Ottumwa) died of COVID-19 at 4:46 a.m. November 12, 2020 at Mercy Hospital in Des Moines. Rick was born in... View Obituary & Service Information

The family of Rick D. Miller created this Life Tributes page to make it easy to share your memories.

You may join the family via livestream at https://my.gather.app/remember/rick-miller

Send flowers to the Miller family.