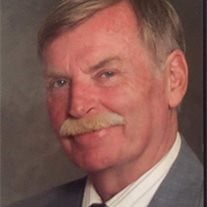 Richard "Dick" H. Butler, 74, of Camanche, Iowa, passed away peacefully at the University of Iowa Hospitals and Clinics in Iowa City, Iowa after a brief battle with Leukemia on Saturday, June 3, 2017. Honoring his wishes, cremation rites have... View Obituary & Service Information

The family of Richard Harry Butler created this Life Tributes page to make it easy to share your memories.

Send flowers to the Butler family.