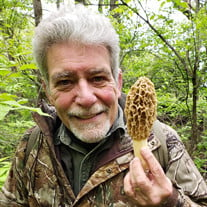 In His Loving Memory PAUL F. BRIDGFORD, DES MOINES Paul F. Bridgford, died peacefully at home of Myelodysplastic Syndrome on February 21st. He was 67 years old. He enjoyed a wonderful family, an accomplished career, passionate hobbies, and the respect and love of neighbors and friends. Paul was born on the Ides of March,1952 in Davenport, and raised in Des Moines where he graduated from Lincoln High School. With lucky lottery number 13, he joined the U.S. Air Force as a graphic arts specialist and cartographer. After a tour of duty in Southeast Asia, Paul began his career in advertising and illustration, teaching briefly at Des Moines Area Community College where he met fellow instructor Susan Koch, whom he married in 1986. Paul expressed his love of nature as a wildlife artist. His extraordinary talent brought him success and national recognition, as he won 14 revenue stamp competitions in Iowa and six other states. His morel and chanterelle mushroom hunting and cooking were legendary. An avid bird-watcher, Paul especially enjoyed creating habitats for hummingbirds and butterflies. Paul was an active Mason, a member of Gnemeth Lodge, the Za-Ga-Zig Shrine, and the Royal Order of Jesters. He was a good man and true. He was preceded in death by his father Ronald Bridgford and sister Mary Walker. Paul is survived by his wife, Susan Koch Bridgford, and two children, Clare Wiseman (Corey) and Grant Bridgford (Leah Ackerman), and granddaughter Haylie Wiseman. He is also survived by sisters Shari (Jerry) Fitzgerald, Deb Hobson, Anna (Brian) Lampe, Lora (Zane) Yates, Marla (Shawn) Kelly, and brothers Clifton and John Pierschbacher, as well as many loving in-laws and countless nieces and nephews. Paul will be remembered at a memorial service held at First Unitarian Church (1800 Bell Ave., Des Moines, IA 50315) on Saturday February 29th at 10:30 a.m. followed by a celebration of life luncheon at the church. In lieu of flowers, memorial contributions may be directed to; Iowa Rivers Revival; iowarivers.org. Ouellette - Pierschbacher - Thomas Funeral and Cremation Care of Ankeny is caring for Paul and his family.

The family of Paul F. Bridgford created this Life Tributes page to make it easy to share your memories.

Send flowers to the Bridgford family.