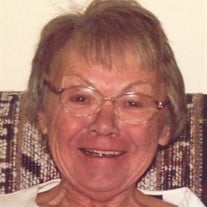 Lynnette Evonnee (Vogt) Schnetzer was born February 20, 1947 to Thelbert and Laura (Banks) Vogt in Ames, IA. She passed away on May 14, 2017 at Iowa Lutheran Hospital in Des Moines, IA. When Lynnette was only 2 years old, she was diagnosed with type I diabetes. At that time, her parents were told that she would probably not live to the age of 20. Lynnette didn�t let diabetes slow her down. It motivated her to beat the odds.�Lynnette met her husband George �Hank� Schnetzer completely by accident. Lynnette�s cousin was involved in a car accident with Hank and his dad. All three were sent to the hospital. When Lynnette visited her cousin, she also met Hank and his dad. Hank asked for her phone number and the rest was history. They were married on April 6, 1968 in Ankeny, IA. Lynnette and Hank would live in Des Moines and Polk City before settling in Elkhart for the next 45 years. They went against doctor�s orders and started their family with the birth of their daughter, Laura. Lynnette was a stay-at-home mom until Laura started school.�Lynnette worked as a teacher�s aide for a couple of years before she and Hank opened an in-home daycare. Hank worked a night job, so he was able to help Lynnette with the kids during the day. They worked as partners to teach more than 25 young children manners, how to share, and how to have fun without video games, cell phones, or television.�Lynnette and Hank were always together. They were best friends and set an awesome example of what love, marriage, and partnership could be. When Hank passed away October 6, 2004, Lynnette made the move to an apartment in Elkhart.�Lynnette was a spitfire, always ready with a comeback. She would pull pranks on people whenever she could get away with it. She had great love for God, a great love for family and friends, and a great love of life. She chose to see the good things in life. When the power was out, she would call the electric company to tell them thanks for the opportunity to clean her ceiling fan. She would brighten the day of those who knew her and of complete strangers that she met at the grocery store. She never hurried just to please other people, but she would take time to make others feel important. This was truly her gift. Lynnette is survived by her daughter, Laura (Tim) Butler of Elkhart, grandchildren, George Butler of Ft. Riley, KS, and Gabrielle Butler of Elkhart, her sister, Peggy Priest (Rob Rater) of Waukee, several nieces, nephews, and other extended family. She was preceded in death by her parents and her husband, Hank. A Celebration of Life Service will be held at 10:30 a.m. Monday at Elkhart Christian Church (252 S. Washington Ave., Elkhart, IA 50073). The family will greet friends from 9:00 - 10:30 a.m. Monday at the Church. Interment will be in the Elkhart Cemetery. Memorials may be made to Elkhart Christian Church or to Juvenile Diabetes Research Foundation. $(document).ready(function(){ var ifr = $("#08l80348573o45u0"); ifr.data("ratio", ifr.attr("height")/ifr.attr("width") ); ifr.removeAttr("width").removeAttr("height"); // Resize the iframes when the window is resized $(window).resize(function(){ var width = ifr.parent().width(); ifr.width(width).height(width * ifr.data("ratio")); }).resize(); });

Lynnette Evonnee (Vogt) Schnetzer was born February 20, 1947 to Thelbert and Laura (Banks) Vogt in Ames, IA. She passed away on May 14, 2017 at Iowa Lutheran Hospital in Des Moines, IA. When Lynnette was only 2 years old, she was diagnosed with... View Obituary & Service Information

The family of Lynnette Evonnee (Vogt) Schnetzer created this Life Tributes page to make it easy to share your memories.