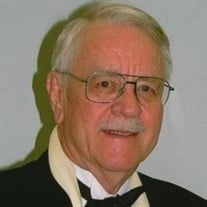 Louis Edward Gardner, Jr., 84, of Ankeny, Iowa, passed away peacefully on Sunday, May 24, 2020, at MercyOne Hospice House, Johnston, Iowa. Lou was born October 8, 1935, in Cincinnati, Ohio, to Louis Edward Gardner, Sr., and Louise A. (Janning) Gardner. He was the youngest of six children. He was married on November 21, 1959 to Elaine Ann (Caine) Gardner of Indianapolis, Indiana. They were married for over 60 years. Lou graduated from St. Francis Xavier Seminary High School, then entered the military and served as an MP in Europe (he had many interesting stories of his exploits during that time) and is a veteran of the U.S. Army. After he came home from his service in the Army, he completed his undergraduate degree at Xavier University and later received his Ph.D. in Child Psychology from Michigan State University. Upon graduation, he was hired as an assistant professor at Creighton University in Omaha, Nebraska, where he raised his family. He led the Department of Psychology as chairman from 1972-1984. After 37 years at Creighton University, he retired with the title Professor Emeritus. Lou loved his time at Creighton University, which allowed him to have his summers off with Elaine and his children and to travel up to South Dakota where the family owned a lake cabin at Lake Poinsett. He enjoyed fishing and tinkering around the lake home he refurbished. Lou was a wonderful handyman (remodeling a 12.5-acre farm by himself in Honey Creek, Iowa, where he and his family lived for 10 years), crafted stained glass art, and was a master in woodworking. He enjoyed researching the American Civil War and collected many artifacts from that period of time. He was a member of the Knights of Columbus for many years and spent time volunteering through this organization. He was an extraordinary minister of the eucharist for St. Pius Catholic Church in Urbandale, Iowa, and often served the sick at Mercy Medical Center in Des Moines, Iowa. For many years, Lou and Elaine traveled all over the world. Their last international trip was to Budapest and Bosnia to see Our Virgin Lady of Medjugorje. Lou was a devoted family man and will be missed by his wife, Elaine; children, Mary Beth (Jim) Skinner, Bloomington, Indiana; Nancy (Steve) Michael, Council Bluffs, Iowa; Philip (Judy) Gardner, Adel, Iowa; Michael (Julie) Gardner, Ankeny, Iowa; and Carolyn Gardner, Walnut Grove, California. Lou has 9 grandchildren, Elizabeth Skinner, Madelyn Skinner, Colin Michael, Grace Michael, Brandon (Tiaurra) Gardner, Josh Gardner, Zachary Gardner, Clayton Gardner, and Estelle Gardner. He is preceded in death by his mother and father, five siblings (Bill, Virginia Crosby, Helen Corsmeier, Don, and Jim), and grandson, Jacob Gardner. In lieu of flowers, the family suggests memorial donations be made to the Food Bank of Iowa. A private family Celebration of Life will be held. He will be cremated and buried in the Iowa Veterans Cemetery, Adel, Iowa.

The family of Louis Gardner Jr. created this Life Tributes page to make it easy to share your memories.

Send flowers to the Gardner family.