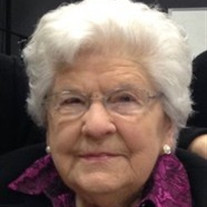 Laura Foster was born on January 27, 1923 in Lincolnshire, England. She served in the British Women�s Army (Auxillary Territorial Service) coordinating the waterproofing of vehicles for the D-Day invasion of World War II. Laura married Cyril Henry Foster following the war and had two children, Brian and Judie. At the encouragement of her sister, Lucy, they moved to the United States in November of 1958. Through Lucy, Laura was led to accept Jesus Christ as her Savior. Her faith was encouraged to grow through a 45-year attendance at the Emmanuel Baptist Church in Toledo, Ohio. There were many young people influenced to know the Bible and live for Christ through her teaching Sunday School classes. Laura was employed by Sears Roebuck and managed the catalog department until she retired. She and Cyril enjoyed traveling back to Great Britain and trips throughout the United States. One of her great joys was her relationship with her six grandchildren. She loved playing Scrabble and gardening. Laura attended Ankeny Free Church and most recently has attended church at Vintage Hills Assisted Living. She was cared for there with dignity and compassion by the staff. She passed away peacefully at the age of 94 on May 3, 2017. Laura is survived by her sister Lu; son Brian (Margie), and their children Laurie (Jason), and Jennifer; daughter Judie and her children Jonathan (Jen), Joshua (Jenise), Adam (Kayla), Aaron (Bria); great-grandchildren, Caleb, Kietlyn, Bennett, Dawson, Landon, Channing, Aben, Grayson, and Bo. Laura is preceded in death by her husband, Cyril; granddaughter Heather Anne; son-in-law John, and sisters Peggy and Joyce. In lieu of flowers, memorial contributions may be directed to the family.

The family of Laura (Graves) Foster created this Life Tributes page to make it easy to share your memories.

Send flowers to the Foster family.