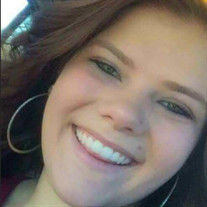 Kellie Renee Staples, born July 26th, 1996, passed away unexpectedly in Taylor County, Iowa on April 11th, 2020 at the age of 23. Kellie is predeceased by Michael Staples (grandfather), Velma Staples (great grandmother), Robert and Alice Pieken (great grandparents). Kellie is survived by her fiancé Nathan Drake, mother Robin Zahrowski, step- father Bryce Zahrowski, father Bradley Staples, sister Charidan Bunch, brother-in-law Jason Bunch, brother David Adams, sister-in-law Krystal Adams, step-sister Shelbie Richards, grandmother Gloria Owens, grandfather Alfred Dhooge, grandmother Janet Staples, grandparents Lonnie and Kathy Zahrowski, grandma Susan Zahrowski, grandparents Laura Staples and Bill Britton, aunt and uncle Michael and Donna Staples, aunt Della Ridgeway, cousin Landon Ridgeway, aunt Tami Glaze, and cousin Kyler Glaze. As a child Kellie was a bundle of energy and smiles. Growing up she loved being active; sledding in the snow with her grandpa Mike, and swimming like she was part fish. As she got older, she followed in her older sister Charidan’s footsteps and joined color guard. She graduated from Windsor High School in Windsor, CO. Kellie was very much a social butterfly, easily making friends wherever she went. She was also a huge animal lover, a trait very much shared with her mother, sister, and brother. Romans 14:8-9 For if we live, we live to the lord; and if we die, we die to the Lord. Therefore, whether we live or die, we are the Lords. For to this end Christ died and rose and lived again, that He might be Lord of both the dead and the living.

The family of Kellie Renee Staples created this Life Tributes page to make it easy to share your memories.

Send flowers to the Staples family.