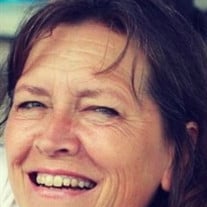 Jenni Sue (Wilhite) Pilcher, 56, passed away unexpectedly on Saturday, April 1, 2017. Jenni was born on March 1, 1961 to Merle and Darleene (Kesterson) Wilhite in Des Moines, IA. She grew up in Des Moines and graduated from Grandview Park Baptist School. She married the love of her life, Fred Pilcher, on October 16th, 1981 and they lived in the Des Moines area all of their lives. Together, they had three children; Amber, Isaac, and Caleb, whom she treasured deeply and truly gave herself to in a lifelong mission of motherhood. Five grandchildren eventually filled her life as well, with the fifth entering the world just a mere day before her passing. Her final hours were spent celebrating the life of her newest granddaughter and caring for her family�a beautiful representation of the servanthood she lived out. Jenni was a gift to many and walked out her days displaying that servanthood and devotion to the Lord. She lived from an eternal perspective, continually reaching out to others, lifting them up in their spiritual walks, and encouraging a deep love for Christ. There were many roles that allowed Jenni to live a life of meaningful relationship and love to those around her; a dedicated wife, mother, �Grammy�, daughter, aunt, sister-in-law, and friend. She loved to celebrate even the smallest of moments, and was often at the forefront of planning countless celebrations and memories that will live on forever in the lives of those she loved. Those left to cherish her memory are her husband, Fred Pilcher; daughter, Amber (Donnie) Kline; sons, Isaac Pilcher, Caleb Pilcher; five grandchildren Myles, Treyvan, Sage, Nash, Primrose, and her parents; Merle and Darleene Wilhite. In death she rejoins her infant brother, John Wilhite and sister, Vicki. Funeral services for Jenni will be held at 11:00 a.m. on Thursday, April 6, 2017 at Saylorville Church (6429 NW�6th Dr., Des Moines, IA 50313). Public visitation will be held from 5:00 - 8:00 p.m. Wednesday, April 5, 2017 at Saylorville Church. Burial will be at Laurel Hill Cemetery in Des Moines, IA. Memorial Contributions or monetary gifts in lieu of flowers may be directed to the family. $(document).ready(function(){ var ifr = $("#08l50348574o45u0"); ifr.data("ratio", ifr.attr("height")/ifr.attr("width") ); ifr.removeAttr("width").removeAttr("height"); // Resize the iframes when the window is resized $(window).resize(function(){ var width = ifr.parent().width(); ifr.width(width).height(width * ifr.data("ratio")); }).resize(); });

The family of Jenni Sue Pilcher created this Life Tributes page to make it easy to share your memories.

Send flowers to the Pilcher family.