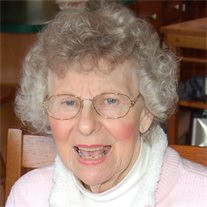 Jean LaVere (Waisner) Barrett was born to Dottie and Earl Waisner in Sac City, Iowa on February 6, 1930. She joined sister Donna and brother Carl.Jean was valedictorian of her high school class. She pursued higher education by going to Buena Vista College in Storm Lake, Iowa to become an English Teacher. While there, she was a football cheerleader, homecoming queen candidate and honored salutatorian of her graduating class. Jean met the love her life in zoology class, Bill Barrett. Her biggest honor was when Bill asked her to marry him. The couple were married October 29, 1950 in Gillet Grove, Iowa.In 1956, Bill and Jean bought a grocery store in Collins, Iowa, "Barrett's Grocery". Jean and Bill raised four children: Sandy, Donna, David and Karen. One of Jean's saddest days was when her 9 year old son David died of a brain tumor in 1967.Jean worked beside her husband at the store in Collins for 33 years. Then they bought B&C Food Center in Dyersville, Iowa with Sandy and Mike Clem. When the couple retired in 2004, they moved back to Collins, Iowa.Jean's joy and delight was dancing and singing with her husband to Big Band music. They shared the passion of watching football, basketball and baseball. They spent vacations going to see nephew Jim LeClair play pro football for the Cincinnati Bengals. Her cheerleading skills were used while watching her Iowa Hawkeyes play. Ultimately, she just wanted to spend time with all her family whom she loved dearly. She considered it an honor to read the scriptures on Sunday mornings at Collins Methodist Church. Her favorite scriptures were about King David in the Psalms.In 2013, Jean and Bill moved to Indian Creek Assisted Living in Nevada, Iowa. On November 9, 2013, Jean lost her lovingly devoted husband Bill of 63 years. The last 11 months of her life she lived at Rolling Green Care Facility where she enjoyed all their activities. She was very content with the life God gave her. She showed her daughters and family what "True Love" really is.Jean went to see her Lord and Savior on Monday, July 4, 2016 which was ironic as she was very patriotic. Funeral services will be 1:00 p.m. Saturday, July 9, 2016 at the United Methodist Church of Collins. Her grandson, Pastor Tim Kimberley will be officiating. Visitation will be from 5:30 to 7:30 p.m. Friday at the United Methodist Church of Collins. Burial will be in the Colo Cemetery. Jean is survived by her daughters: Sandy (Mike) Clem of South Sioux City, NE; Donna (Tom) Kimberley of Collins, IA; Karen (John) Vallandingham of Burlington, IA; eight grandchildren, eleven great grandchildren with another great grandson on the way. His name will be Barrett. In death Jean rejoins her parents, sister and brother, husband, Wilferd "Bill" Barrett, and her only son, David. Cemetery Details Colo Cemetery Colo, IA, Visitation JUL 8. 05:30 PM - 07:30 PM United Methodist Church of Collins 225 3rd Ave. Collins, IA, US, 50055 Service JUL 9. 01:00 PM United Methodist Church of Collins 225 3rd Ave. Collins, IA, US, 50055

Jean LaVere (Waisner) Barrett was born to Dottie and Earl Waisner in Sac City, Iowa on February 6, 1930. She joined sister Donna and brother Carl.Jean was valedictorian of her high school class. She pursued higher education by going to Buena... View Obituary & Service Information

The family of Jean LaVere (Waisner) Barrett created this Life Tributes page to make it easy to share your memories.