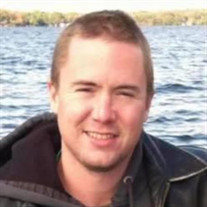 In His Loving Memory Jay T. Emory Jr. 1985 - 2020 “Jay T” Thomas Emory Jr., 35 of Des Moines, IA passed away unexpectedly on Sunday, April 13, 2020. Cremation rites will be accorded and private services to remember and celebrate Jay T will be held at a later date at Lake Minnetonka in Minnesota. Jay Thomas Emory Jr. was born April 9, 1985 to Jay Thomas and Sally Marie (Perry) Emory in (St. Paul) Minnesota. Jay grew up in Illinois and graduated from Danville High School. He later attended college at Western Illinois University and Missouri State. Jay loved Minnesota Twins baseball along with fishing and boating. He enjoyed staying active, being outside, and working out. He was a friend to many and had a contagious smile. In death Jay T rejoins his father, Jay Thomas Emory and his grandparents. Left to cherish his memory is his mother, Sally Marie Emory of Aurora, IL, his sister Sarah (Jeremy) Prendergast and two daughters Sienna and Macy, Naperville, IL, his sister Leslie Peters, Aurora, IL, his sister Amy (Jason) Beckman, three children, Sophia, Jason Jr., and Jackson, Bolingbrook, IL. In lieu of flowers, we ask that you donate or support a local recovery home in hope that maybe someone else could get their fresh start.

The family of Jay "Jay T" Thomas Emory Jr. created this Life Tributes page to make it easy to share your memories.

Send flowers to the Emory family.