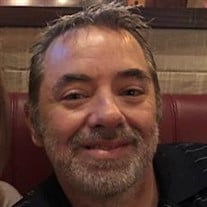 Jason (Jey) Ray Webb, 45, passed away unexpectedly on Thursday, January 9, 2020. Cremation rites will be accorded and a celebration of life will be held on Saturday, January 25, 2020 at Bistro 303 (303 Westport Rd Kansas City, MO 64111) from 11:00 a.m. to 3:00p.m. Jey was born on August 29, 1974 in Fort Hood, TX to Donald Ray Webb and Ann Webb-Puckett. He graduated from Central High School, Helena, AR in 1991 and later in life completed his Bachelor's degree at Mid America Nazarene University at the age of 43. Jey worked in the Casino industry for over 10 years where he made many long lasting friendships. He held many jobs over the 15 years he lived in Kansas City.  After obtaining his bachelor's degree he landed at Littler Mendelson. Jey was diagnosed with cancer in June of 2018 and began chemo and radiation treatment in September of that year. A year later he underwent three surgeries to repair what the radiation had done to his body the year before. After being discharged on Wednesday, January 8, 2020 we brought him home to begin the healing process. A day later, Jey was taken away from us. Those left to cherish his memory are husband, Matt Reese; mother, Ann Puckett (Bill Carnathan) of Poplar Grove, AR; father and mother in law, Jim and Carol Reese of Overland Park, KS; brother in law, Aaron Reese (Rachel Lewis) of Overland Park, KS; and many aunts, uncles and cousins. In death, Jey rejoins his daughter, Breanna Barber; two uncles, Alfred and Alton Dunlap; cousin; Wayne Dunlap Jr. and his grandparents.  In lieu of flowers, memorial contributions may be directed to the American Cancer Society.

The family of Jason Ray Webb created this Life Tributes page to make it easy to share your memories.

Send flowers to the Webb family.