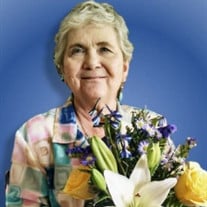 Helen Louise Cook, 76, originally of Grinnell, IA, passed away Monday, June10, 2019 at her home in Ankeny, IA. Cremation rites have been accorded and a Celebration of Life will be from 2:00 - 5:00 p.m. Saturday, June 29, 2019 in the Spinner Ballroom at Prairie Meadows Racetrack and Casino, Altoona IA. (The family is requesting guests to wear blue, any shade). In lieu of flowers, memorial contributions may be directed to the Des Moines Homeless Veteran’s Stand Down, (www.desmoineshvs.com). Those left to cherish her memory are her daughter, Deborah Cook of Ankeny, IA; William Lynch (Norma) of Marshalltown, IA; one sister, Jane Wright of Ankeny, IA; and her grandson, Shawn Lohman of Houston, TX, and many nieces and nephews. In death Helen rejoins her life partner, Stanley Wright of Des Moines, her two sons; Scott and David, parents; Ben and Retha Lynch and three brothers; Mike Lynch, Jim Lynch and Pat Lynch. Helen was born September 3, 1942 in Grinnell, IA to Ben Wesley and Retha Mae Beason Lynch. Raised in Grinnell, she attended Davis Grade School and Grinnell High School. She moved to Des Moines, IA in 1966 when she started her career for the State of Iowa as an accountant. After 33 years of dedicated service, she was able to retire in 1999, at the young age of 58, although she continued to work part time between RV road trips with her companion Stanley Wright. Helen enjoyed time with family, traveling, and playing bingo and poker, especially Texas Hold ‘Em. She loved reading, crossword puzzles and rarely missed the Rachel Ray Show. Her favorite times were RV traveling the country with her beloved Stanley. Often, they would pick a date to head out and then figure out the destination once they got on the road!   Helen had many challenges in life but she was a survivor. She was paralyzed by polio as a young child but she never considered herself a victim nor disabled despite her need for a leg brace her entire life. She also lost her father when she was very young but held strong to help her mother raise her five siblings. She lost two sons, Scott and David. Only a few weeks after the loss of her beloved Stanley in 2009, she was diagnosed with breast cancer but as always, she stayed strong through the months of treatments for the cancer. She continued on, though she received two more cancer diagnosis, the most recent just two months ago. She faced her losses and challenges with courage and with rare complaint despite years of personal and private grieving over so many losses. Independent, competent, and undeterred by her battles, Helen was a survivor and admired and loved by all who knew her.         Donations may be made to: Des Moines Homeless Veteran's Stand Down1070 50th Street, 8E, West Des Moines IA 50266Tel: 1-515-242-4666Web: http://www.desmoineshvs.com

The family of Helen Louise (Lynch) Cook created this Life Tributes page to make it easy to share your memories.