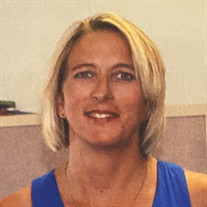 DeAnn Linn Spicer passed away April 14, 2020 at the age of 51. A celebration of life service will be held at a later date. Memorials may be made in care of DeAnn’s family at 11415 220th Avenue, Milo, IA 50166. DeAnn Linn Cooper was born January 27, 1969 to Myron and Ina Cooper in Des Moines, Iowa. DeAnn was one of four children born to the couple and was raised alongside her siblings in Melcher-Dallas, Iowa. She graduated from Melcher-Dallas High School with the class of 1987. On June 17, 1998, DeAnn was united in marriage to Bill Spicer. DeAnn was a great mom. She was a loving, caring, and giving person. This was obvious, not only in her parenting, but throughout all of her relationships. She was a giver and had a passion for life. She also had a stubborn streak and was hard-headed about things she really cared about. Over the years, DeAnn worked for American Republic, Principal, and LMC. When she wasn’t working, DeAnn loved to be outside in the sunshine. She enjoyed boating and spent countless hours on her house boat. Above all else, DeAnn cherished the time that she spent with her family. Her daughter and grandchildren meant the world to her. DeAnn will be greatly missed by her father. Myron Cooper; children: Kayla (Ty Davis) Cooper, Nick (Megan) Spicer, and Aaron Spicer; grandchildren: Giavanna, GiAni, and Harrison; her siblings: Dave (Tonya) Cooper, Dan (Jen) Cooper, and Doran (Joelle) Cooper; along with many nieces, nephews, relatives, and friends. DeAnn was preceded in death by her mother, Ina Cooper; and her husband, Bill, in December of 2018.

The family of DeAnn Spicer created this Life Tributes page to make it easy to share your memories.

Send flowers to the Spicer family.