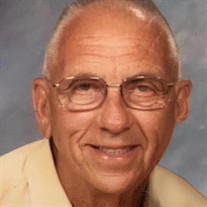 Private services for Daryle G. Jass, 84, of Ankeny, formerly of Mason City, will be April 24, 2020 at the Lutheran Church of Hope in Ankeny. Family and friends can view a Live Feed of the service beginning at 10:30 a.m. on Friday on our Facebook Page: Ouellette, Pierschbacher, Thomas Funeral & Cremation Care. A celebration of life service will be held at a later date when all family and friends can be together and honor a life well lived. Memorial donations may be made to the Lutheran Church of Hope The Cupboard, and sent to his daughter, Brenda Hemsted c/o Bankers Trust 1925 N. Ankeny Blvd Ankeny, IA 50023. Memories may be shared on life at www.optfuneral.com. Daryle Gene Jass was born on January 8, 1936 in Garner, Iowa to Otto and Eva (Evanson) Jass. He grew up in the Garner area and graduated from Garner High School in 1955. In High School Daryle participated in basketball and football setting many records, one that stood for over 50 years. After graduating, Daryle joined the Army serving for nearly two years. After returning home he began working for Northwestern Bell in 1958, which was the beginning of a 47-year career in the telecommunication industry. He was married to the love of his life, Carol Church, on January 14, 1961. They were blessed with three children: Tammy, Brian, and Brenda. After retiring from AT&T in 1989, Daryle and Carol moved to Ankeny and Daryle went to work for Communication Innovators until 2005. Daryle loved to stay busy and was helping with maintenance and groundskeeping at Bankers Trust until just a few short years ago. He did enjoy traveling with Carol and his family as they visited Estes Park and enjoyed hiking there. Daryle and family took many camping and fishing trips to Minnesota and Canada making a lifetime of memories. All his life, Daryle truly enjoyed watching all sports and was an avid Iowa Hawkeye fan. Daryle passed away April 20, 2020 at the age of 84 years. He will be greatly missed by his wife of 59 years, Carol; his children: Tammy (Bill) Zook, Brian (Cheryl) Jass, and Brenda (Shaun) Hemsted; grandchildren: Adam (Vanessa) Zook, Amanda (Jared) Rokke, Brittany (Jeff) Schroeder, Tyler (Gabie) Jass, Jordan (Courtney) Hemwood, Nick (Brittany) Hemsted, and Ryan (Kaelin) Hemsted; 6 great grandchildren with two more on the way; brother, Doug (Marilynn) Jass; sister-in-law, Arlene Jass; along with many nieces, nephews, relatives, and friends. Preceding him in death were his parents: Otto and Eva; and siblings: Gary Jass and Connie Albers.

Private services for Daryle G. Jass, 84, of Ankeny, formerly of Mason City, will be April 24, 2020 at the Lutheran Church of Hope in Ankeny. Family and friends can view a Live Feed of the service beginning at 10:30 a.m. on Friday on our Facebook... View Obituary & Service Information

The family of Daryle Gene Jass created this Life Tributes page to make it easy to share your memories.

Send flowers to the Jass family.