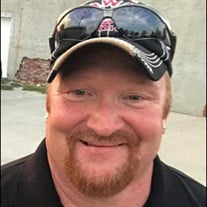 Christopher Michael McNeeley of West Des Moines, Iowa passed away on February 22, 2021. Cremation rites will be accorded and a memorial visitation will be held in Chris' honor on Saturday, February 27 from 2-5 pm at Ouellette-Pierschbacher-Thomas Funeral Home located at 722 Ankeny Boulevard in Ankeny, Iowa. Chris was born on March 2, 1972 in Des Moines, Iowa to Kim (McNeeley) Samuell and Roger Gilliam. He is survived by his son, Christopher Riley McNeeley, parents Kim and Brent Samuell of Maricopa, AZ, step-father Larry Johnston and grandmother Marjorie Johnston, estranged wife Jena McNeeley and step-children David and Kena, step-sons Cody and Cole Edgington, siblings Cory Johnston, Paul Gilliam and Cammie Brown. Christopher never really had many material possessions but what he did have was a tremendous work ethic and abundance of skill. If you needed something fixed then he was the guy to do it. He made signs, lights, and bird houses of all shapes and sizes. His garage always looked like a mad scientist's laboratory but by goodness he always knew where everything was! Chris was devoted to his employers, even serving on AFSCME as an officer for many years where he met many good friends. Christopher also valued knowledge deeply and despite the fact that he never went on to a higher education he was often one of the most knowledgable people in the room. Especially when it came to animals and nature. Christopher loved birds, butterflies, and he especially loved dogs. In Chris' younger years, his time was often spent with Grandpa Bob tinkering in the shop and his aunts and uncles doing who knows what. Often times Chris' adventures with his school buddies led him to risky situations but the memories they created were quite entertaining. Chiefs, Hawkeyes and Harleys!! Chris got much enjoyment out of riding his motorcycle and spending time with his friends. His weekends often consisted of long rides with his girlfriend, Staci Jones, and friends from all over including his life long buddy Jesse Ross. He was also an avid pool player and a member of team Deathstroke captained by one of his dearest friends Floyd Castle. Some of the best times of his life were on his trips to Hawaii and Vegas that the team won through tournaments. Chris was the first to show up when anyone needed a hand. His loyalty to friends and family was unmatched. His beliefs were strong. Knowing his suffering has been replaced with peace and comfort from the lord gives comfort to those who loved him. Chris loved watching the Hawkeye Wave on Saturdays and the family requests any donation you'd like to make in Christopher's honor be made to University of Iowa Stead Family Children's Hospital. University of Iowa Center for Advancement c/o UI Stead Family Children's Hospital Fund PO Box 4550 Iowa City, Ia 52244-4550

Christopher Michael McNeeley of West Des Moines, Iowa passed away on February 22, 2021. Cremation rites will be accorded and a memorial visitation will be held in Chris' honor on Saturday, February 27 from 2-5 pm at Ouellette-Pierschbacher-Thomas... View Obituary & Service Information

The family of Christopher Michael McNeeley created this Life Tributes page to make it easy to share your memories.

Send flowers to the McNeeley family.